Happy New Year!  From all of us at Wheels That Won The West® Publishing & Archives. 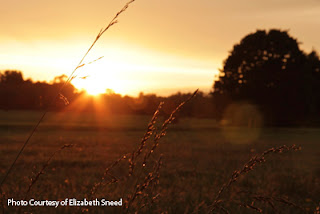 Posted by David Sneed, Wheels That Won The West® Archives, LLC at 12:25 PM

From north to south and east to west, America’s early western vehicles still turn heads and add legendary atmosphere to any gathering.  It’s a powerful legacy that has many folks always looking for the ideal wood-wheeled icon.

One of the rarest discoveries we’ve seen to date is this documented 1878 Studebaker with original paint, logos and serial number.  Put in some perspective, when this piece was built, America was barely 100 years old, the great western cattle drives were still taking place and Billy the Kid, the Younger gang and Jesse James were all making headlines.

After consulting with multiple historians, collectors and officials with the National Studebaker Museum in South Bend, Indiana, this find is believed to be the earliest, original condition, production-built Studebaker known to exist.

It’s great to see such important pieces of our past being found and preserved for future generations.  Ultimately, it’s even more encouraging to know that there are still valuable pieces of America’s early history waiting to be discovered! 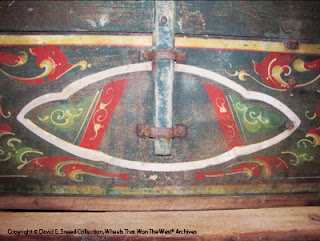 Posted by David Sneed, Wheels That Won The West® Archives, LLC at 9:03 PM

Wishing each and everyone a Merry Christmas! 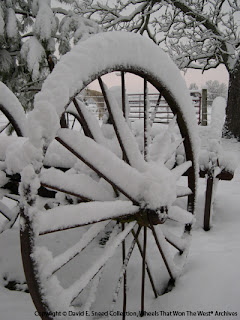 Posted by David Sneed, Wheels That Won The West® Archives, LLC at 11:35 PM

With such a large archive of rare imagery and primary source information, we regularly receive numerous questions related to early wagons and western vehicles.  It’s allowed us the great privilege of assisting individuals and organizations all over the world.  One of our projects earlier this year involved helping the wonderful folks at OFS (Furniture) Brands to identify, date and authentically re-create the period-correct paint and graphics for an original Fish Bros. Wagon built in Clinton, Iowa…  (Yes, Fish Bros. was also in Racine, Wisconsin but that’s another – very large – story)

Doug Hansen and his team of craftsmen from Hansen Wheel & Wagon did an outstanding job transforming this paint-less, ca. 1905 wagon, replicating the original, fresh-from-the-factory colors, striping and authentic artwork.  Exclusive period-accurate imagery, artwork and information from our Wheels That Won The West® Archives were used to help ensure the vehicle’s historical accuracy in every detail. 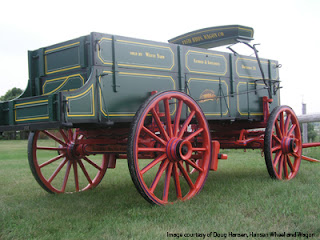 Posted by David Sneed, Wheels That Won The West® Archives, LLC at 11:24 AM 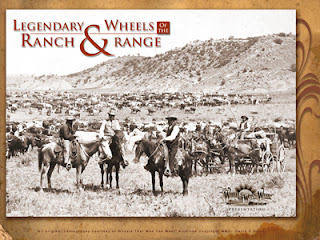 Along with Madison Allen and Doug Hansen, we were honored to be asked to speak to the American Chuck Wagon Association at the Cowboy Hall of Fame in Oklahoma City earlier this year.

During the event, we also released the first of a multi-volume series of books covering early western vehicles and the related transportation industry.  Entitled, “Borrowed Time – A Tribute to the Wheels that Built the American West” more details on this new book series can be found on our website at http://www.wheelsthatwonthewest.com/ 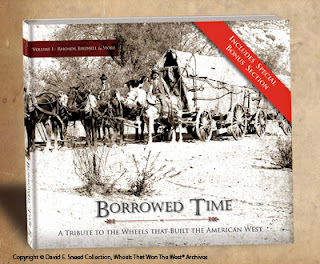 Posted by David Sneed, Wheels That Won The West® Archives, LLC at 3:39 PM

Nearly two decades ago, we began looking for answers to questions about America’s early western vehicle industry.  From wagons to coaches and so much more, the research quickly snowballed.  Today, after years of endless digging and sharing findings with thousands of folks the world over, those initial areas of curiosity have helped built a strong archive of authoritative details.

As we begin our 18th year of vehicle research, evaluations and conservation, it’s clear that we still haven’t scratched the surface on what was a massive industry during the 19th and early 20th centuries.

Much of what we have learned, though, has already helped museums, archeologists, historians, businesses, collectors, writers and enthusiasts the world over.  As we continue in our quest to help locate and preserve the rarest elements of America’s wood-wheeled history, we encourage your feedback and look forward to hearing from you. 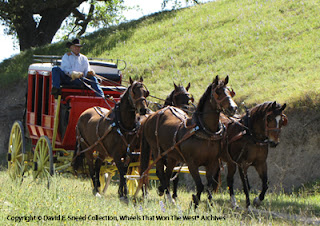 Posted by David Sneed, Wheels That Won The West® Archives, LLC at 8:57 AM