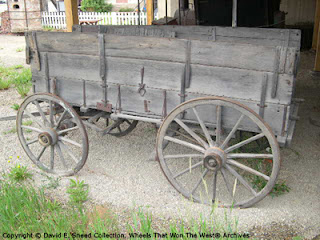 LOST IDENTITIES… Many early wagons have lost enough of their original and obvious maker markings that it can be difficult to quickly determine a maker.  Combined with potential changes or adaptations to the vehicle over the years, reaching a firm conclusion on a builder can involve lengthy studies in some cases.

While documentable identities have the potential of significantly increasing a vehicle’s value, ultimately, it takes the cumulative matching of multiple, distinct construction features with primary sources to deliver an authoritative review.

To help avoid inaccurate identifications, it’s important to realize that many brands used similar features.  We typically review a host of different construction traits on the box and gear before making statements relative to a maker, date of manufacture or level of originality. 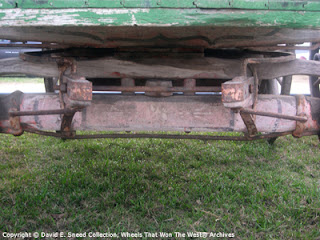 Posted by David Sneed, Wheels That Won The West® Archives, LLC at 2:09 PM 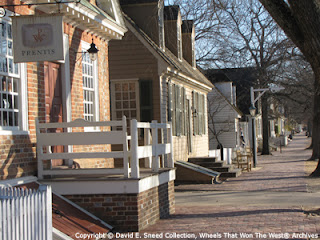 Simply put, the 2012 CAA/CWF International Carriage Symposium that took place in Colonial Williamsburg January 11th - 14th was an extraordinary experience.  It seemed like virtually every facet related to horse drawn vehicles – historical to modern day – was covered in this showcase event.

Hosted by the Carriage Association of America and the Colonial Williamsburg Foundation, the 4-day gathering drew conservators, historians, writers, collectors, driving competitors and horse drawn vehicle enthusiasts the world over. 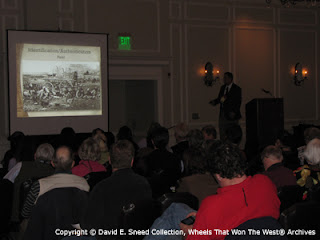 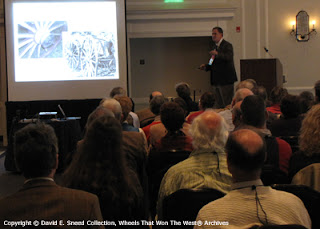 I was honored to be one of fourteen speakers from the U.S., Russia, Sweden, Canada, England and Switzerland.  It was all part of the 50th Anniversary celebration of the Carriage Association.  Our Wheels That Won The West® presentation covered the heavier, box style wagons that permeated the American West from 1850 through the turn of the 20th century.

While at Colonial Williamsburg, we had the opportunity to examine a great deal of history -  including a pair of early Virginia road wagons.  The wagon with the blue box shown here is known as the Minnick-Zirkle ‘waggon’ and is a rare, surviving freight wagon believed to have been built around 1810-1812.  You can read more about the provenance of this wagon in the book, Adventures of a Waggon Tracker, by Franklin Zirkle. 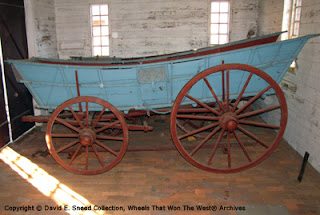 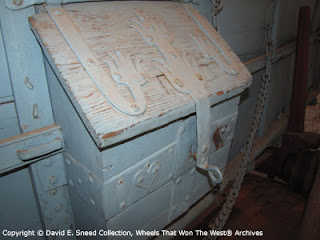 There were several other speakers sharing details related to period American wagons including Tom Lindmier's excellent presentation on 19th century military vehicles.  Also intriguing was an informative program by Thomas Kinney covering early city/business wagons.  Leading conservator, Brian Howard from Pennsylvania discussed a number of fascinating conservation projects that he and his firm, B.R. Howard & Associates, have completed - including work on the legendary Studebaker "Aluminum Wagon" built for the Columbian Exposition in 1893 and the Lafayette carriage which, like the Aluminum Wagon, is housed in the Studebaker National Museum in South Bend, Indiana.

Surrounded by so many vehicle experts and so much history, this was a first class event with a great deal of insightful information to offer.  My heartfelt thank you and congratulations to the Carriage Association of America and the Colonial Williamsburg Foundation for producing and hosting such a powerful and important symposium.
Posted by David Sneed, Wheels That Won The West® Archives, LLC at 4:21 PM

Studebaker Wagons: At Work in the West 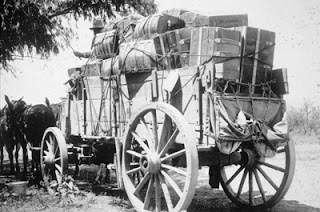 Identifying the maker of a paint-less, early western vehicle can be difficult… Especially, when the challenge is amplified by a lack of photography or access to the vehicle.

When we were approached for insights into this government archive photo, we immediately began to review the piece and catalog multiple, significant details.  After careful scrutiny, we were able to conclude that the freighter shown here is an original Studebaker Rack Bed wagon with steel skeins and California seat riser.  The topmost sideboard has been added but much of the remainder of the box appears original – albeit weathered and worn from use.

According to archeologist, Jon Czaplicki, this wagon was used to help carry supplies (in this photo, luggage for the stone masons) while building the Roosevelt Dam just a few years after the turn of the 20th century. Special thanks to the Arizona Bureau of Reclamation and Salt River Project for sharing this significant piece of history with us. 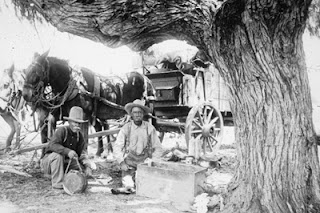 Posted by David Sneed, Wheels That Won The West® Archives, LLC at 1:38 PM

Tell Us Your Favorite & Why…

America’s early, heavy vehicle industry created a lot of popular brand names.  With so many labels to choose from, almost every enthusiast today has a favorite.  From Schuttler to Studebaker, Moline to Milburn and thousands more, let us know your pick and why. 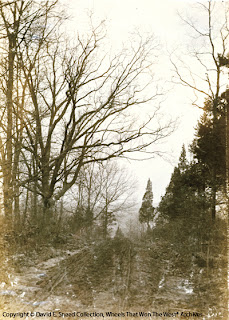 Posted by David Sneed, Wheels That Won The West® Archives, LLC at 5:28 PM