Is This All That’s Left?

For decades, we’ve made it a point to search for rare, surviving examples of ’s early wagon and coach industry.  In the process, we’ve been extremely fortunate to help locate and preserve important vehicles and materials related to legendary builders like Studebaker, Peter Schuttler, Joseph Murphy, Bain, , , , Luedinghaus, Gestring, Fish Bros., and so many more.  When it comes to tracking vehicles, one company that has largely eluded us is the Kansas Manufacturing Company.  While we do have access to a few scarce pieces of literature, finding one of the thousands of wagons they built has been much tougher.

The firm has a great western history, in part because it was owned and operated by the well-known U.S. Senator, freighter and railroad builder, Alexander Caldwell.  Mr. Caldwell’s company was one of several large wagon makers utilizing prison labor and in less than a handful of years between 1876 and 1880, they built hundreds of two, four and six mule army wagons as well as at least 50 ambulance wagons and 25 Dougherty wagons. 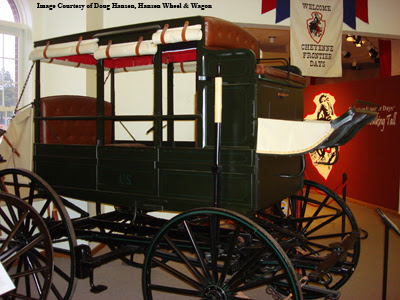 Posted immediately above is one of the Dougherty wagons from the Kansas Manufacturing Company that may have been produced during this timeframe.  This vehicle is housed in the in .  We appreciate Doug Hansen of Hansen Wheel and Wagon Shop forwarding this image to us.  As part of our continuing research, several years ago we came across an extremely scarce (circa 1880) image of one of the Kansas/Caldwell wagons positioned near an early dealership but, know of no identifiable dead-axle wagons that have survived. 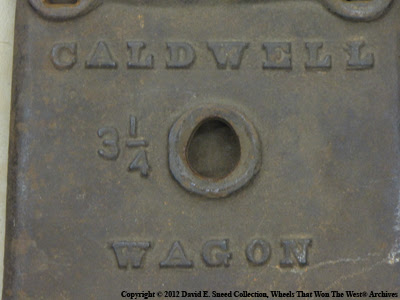 To date, the closest we’ve come to one of the built dead-axle wagons is this reach plate which once centered a running gear.  As a builder of thousands upon thousands of farm, freight and military wagons, could it be that these few examples are all that’s left of the firm?   If you know of a documented or wagon, give us a shout and let us know.  With so much early western history attached to this company, these vehicles certainly deserve their just recognition.
Posted by David Sneed, Wheels That Won The West® Archives, LLC at 6:17 AM

The Way It Was…

Travel west of the in the mid-1800’s could be full of challenges.  Some of those trials were recorded in diaries, newspapers and letters of the time period.  Other travelers recounted memories in book form to be shared with future generations.  All of these primary source accounts help us better understand the stresses faced by the vehicles, animals and individuals headed west into rugged and wild terrain. 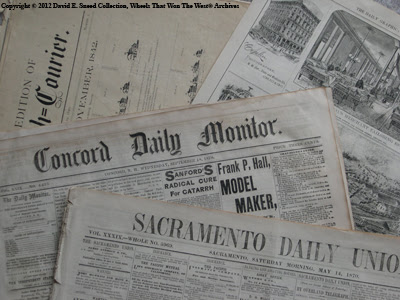 From time to time in this blog, we’ll share some of these actual events and remembrances from folks who lived and participated in one of the greatest migrations in American history.  This week, we’ll look at excerpt from The Old Journey, a nineteenth century book by Alfred Lambourne as he shares of a particularly harsh, stormy night on his wagon trip west in 1847…
“The night drives were among the most trying experiences upon the overland journey.  Usually they resulted from the drying of some stream or spring where we had expected to make the evening camp, and the consequent necessity of moving forward.  Our worst drive of this kind was to reach La Prelle River after leaving …  Wildly the lightnings glared, their lurid tongues licking the ground beside us.  The road was deluged in the downpour of water; and what with the crashing of thunder, the sudden glare of light, and the wild dashing of rain, the poor cattle (ox teams) were quite panic-stricken.  It was hard work to make the poor brutes face the storm.  Yet, after all, their sagacity was better than ours.  Several times we would have driven them over the edge of a precipice had not their keener senses warned them back.  We would have shuddered, so our captain afterwards told us, could we have seen where the tracks of our wagon-wheels were made that night.” 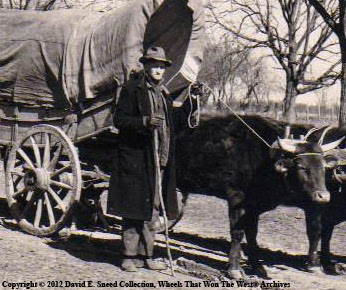 While trials could take their toll on man and beast, there were also many heroics recorded in newspapers of the time.  Some read like an action-packed script as did this account from the Shasta Courier in December of 1855...
"One day last week the driver of one of the California Stages was thrown from his box, a short distance this side of .  The team at once commenced going at a frightful pace.  The outside passengers jumped off, and the chances for a beautiful smash-up were quite flattering.  This would doubtless have been the consequences, but for the conduct of Mr. Lusk, messenger of the Pacific Express, who, with a daring seldom equaled, climbed from the inside of the stage upon the driver's foot board, thence upon the tongue of the stage, and finally upon the back of the near wheel horse, from which position he gathered up the lines, and brought the frightened team, and still more frightened passengers, safely up to the Cottonwood station." 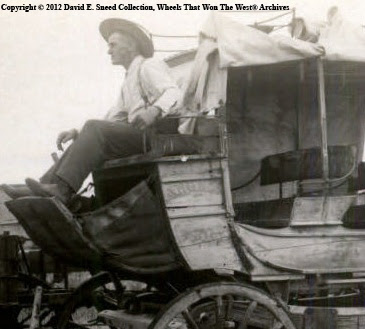 Both the early and modern film industry is sometimes accused of exaggerating or sensationalizing the 1800’s western experience.  Perhaps it’s somewhat to be expected as time has a way of clouding reality and generating a certain amount of cynicism in larger-than-life tales.  However, the fact that so many of these adrenaline-packed events can be found in early narratives reminds us that our ancestors did indeed possess mettle worthy of respect and woven with reward.
Posted by David Sneed, Wheels That Won The West® Archives, LLC at 4:17 AM

Any student of history will readily admit that the subject has a way of repeating itself.  Good ideas, in particular, will often resurface from generation to generation.  It’s a propensity that’s easy to see in a number of areas.  In the first volume of our western vehicle book, Borrowed Time, we share details related to an 1875 patent for twin axle steering.  The idea was used in a number of areas within the horse-drawn transportation industry and, more recently, was part of a 4-wheel steering concept for Chevy trucks.  A variation of multi-axle and wheel steering is also used in competitive vehicle events like rock climbing and monster truck shows.

Even a brief perusal of early wagon companies will show that some ideas between brands were duplicated in these vehicles.  It’s one more reason we always strongly advise against relying on a single feature when attempting to identify any particular vintage wagon maker.  We’ve covered some of this before and will discuss even more in an upcoming post.

When it comes to competitive and innovative wagon makers, the Peter Schuttler Company from Chicago is one of the most legendary and distinctive brands.  Throughout their history, the firm secured a number of patents on early vehicle designs.  One patent they received in 1882 dealt with a unique configuration for a king bolt.  Connecting the rocking bolster, sand board, reach and axle together, this entire configuration received a tremendous amount of stress.  More than  simple one-dimensional pressure, the connection to the rocking bolster also racked the pin in numerous directions and angles.  It’s a construction feature that continually placed high demands on the king bolt.  Unfortunately, the pin did not always fare well under the strain.  Hence, the patented T-handle-shaped king bolt that allowed the forward bolster to float more freely, somewhat independent the bolt.

Now, fast forward an entire half century to 1932 and note the similarity in a pertinent element of one of Springfield Wagon Company’s patents.  Even though the patents are separated by 50 years, there are clear similarities in the king bolt function and design.   It’s one more example of how good ideas tend to re-surface as well as an admonition to use great caution when looking at single elements to identify wagons that have lost their maker marks.
Posted by David Sneed, Wheels That Won The West® Archives, LLC at 6:56 AM

My kids are now grown and my wife and I miss the vacations we used to take as a family.  Reinforcing the lasting memories those times gave us; it’s now a firmly established household joke that I always had an agenda for each of the trips.  In other words, my intrigue of studying early western vehicles always seemed to ensure we traveled through areas where wagons or coaches could be found.  Okay, I’m guilty as charged but, there truly are a lot of incredible vacations where these icons of America can be included. 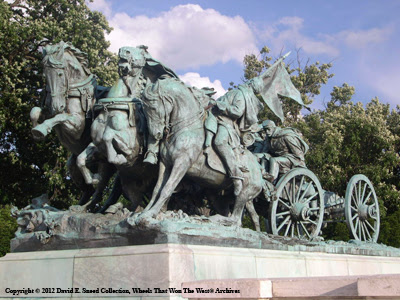 From the California coast to the Rockies, Texas to Indiana, Washington D.C to Kentucky, St. Louis to Florida and New England to the Dakotas, America’s wood-wheeled history is all around us.  Capitalizing on that heritage and the surrounding attractions can provide some wonderful opportunities to learn and further appreciate the foundations of our great nation. 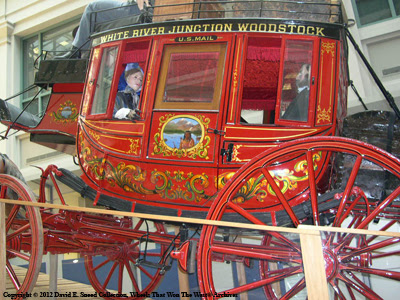 To that point, several years ago I was speaking at a conference in Cody, Wyoming for the National Stagecoach & Freight Wagon Association (NSFWA).  This is a great group of folks and the event was one of the best planned that I’ve ever had the privilege of attending.  As a gateway to Yellowstone National Park, Cody is full of activities for the entire family.  It’s easily accessed by air travel and the small town includes a world-class, western heritage museum known as the Buffalo Bill Historic Center. 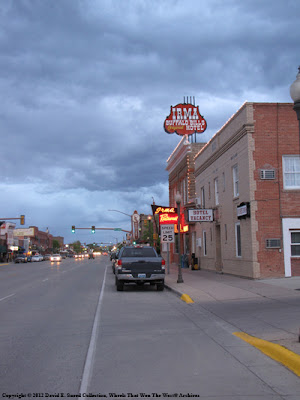 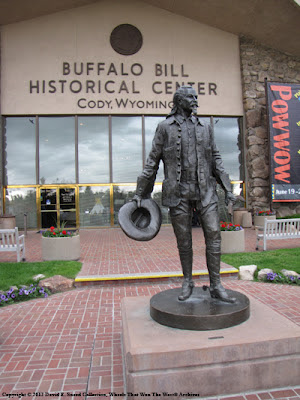 Just up the road from the museum, Old Trail Town is a must-see stop for western vehicle enthusiasts.  During the NSFWA event, we had a great time going through Old Trail Town’s heavy mountain wagons, chuck wagons, sheep camp wagon as well as other original condition, business and military vehicles from the 19th and early 20th centuries.  It’s a lot to take in but a great stop if you want to study these connections to yesterday. 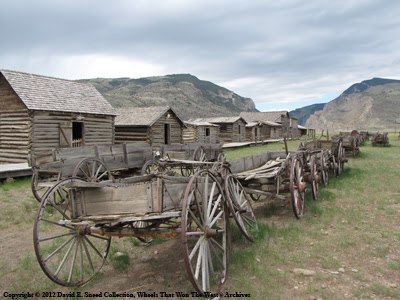 Yellowstone, itself, is an impressive day trip (or longer if desired) from Cody.  Old Faithful and all the scenic wonders of this national park provide a drive-thru experience that will have you wishing for more batteries and memory cards for your cameras. 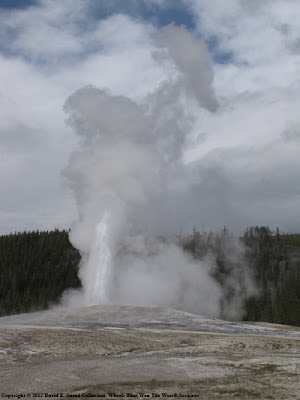 If you’re looking for other areas of the country to explore and wonder what might be available, you can check out the “Destinations” section on our website for ideas.  Maybe the posts there can help point you in a memorable direction.  Just don’t be surprised if you end up earning a reputation for ulterior motives!
Posted by David Sneed, Wheels That Won The West® Archives, LLC at 5:07 AM