Over the years, we’ve been extremely privileged to have been able to help uncover and document so much previously unknown information related to America’s early western vehicles.  As part of those successes, however, there have been plenty of times the lack of answers has delivered a strong dose of humility.  This wood-wheeled subject is huge, daunting and may never be completely studied.  Fortunately, the thrill of the chase has provided plenty of impetus to keep digging. 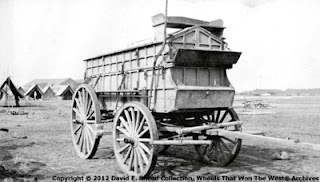 A good case in point;  Roughly six years ago, we acquired a pair of old photographs showing what appeared to be some type of U.S. military supply wagon.  It’s not one we’ve seen promoted or written about nor were we able to quickly locate a source to properly identify the vehicle.  Recently, though, we finally placed a stamp of success on this search when we uncovered military paperwork showing the unique design to be a “Tool Wagon” built to carry a multitude of equipment for the U.S. Army Corps of Engineers.  The rare photos we had collected are from the mid-teens in the 20th century and are now accompanied by an original, near-century-old set of plans drawn up by the War Department. 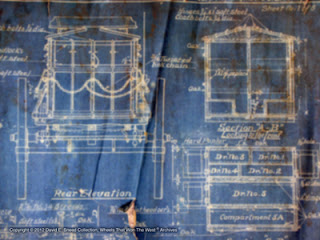 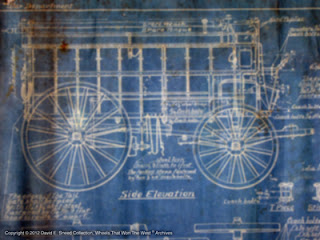 In discovery after discovery, the Wheels That Won The West® Archives have grown significantly while simultaneously gaining a reputation for sleuthing out obscure or lost horse drawn vehicle history.  As we continue this blog, we’re looking forward to sharing even more documented findings and encourage you to share your own questions related to early heavy vehicle design, use, brand, purpose and so forth.  We look forward to hearing from you.
Posted by David Sneed, Wheels That Won The West® Archives, LLC at 5:30 AM

While we’re on the subject of Peter Schuttler and that brand’s relationship to the Springfield Wagon Company, I thought it might be pertinent to share a few images recently passed on to us by Doug Hansen of Hansen Wheel and Wagon Shop in Letcher, South Dakota. 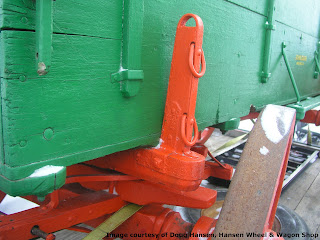 For years, I’ve looked for surviving examples of Schuttler-labeled wagons built by Springfield.  After all, we know the transitional history of the brand (see last week’s post) and I have catalogs from Springfield showing the Schuttler-branded vehicles they offered.  In spite of that awareness though, I’d never seen one until Doug relayed these images of a wagon he ran across. 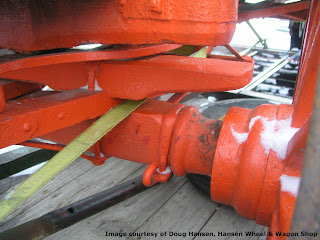 From all indications (there are numerous ‘blended’ features from Schuttler & Springfield), this Schuttler wagon appears to be one of the intermediary vehicles built by Springfield shortly after their acquisition of the Schuttler brand in the mid 1920’s. 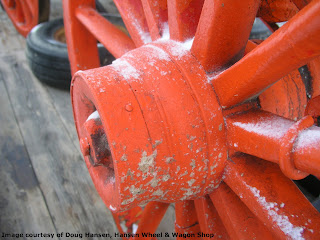 Posted by David Sneed, Wheels That Won The West® Archives, LLC at 6:30 AM

For collectors and fans of the legendary Peter Schuttler wagon brand and the quality vehicles built by the company, learning how the name was used later on may seem a bit unpleasant. Many are aware that the Springfield Wagon Company in Springfield, Missouri acquired the rights for the Schuttler name after the Chicago company closed in 1925. Fewer are familiar with all the ways the name was used afterward. 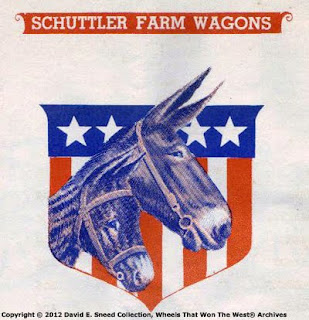 While Springfield certainly branded some wagons as Schuttler, they also identified one of their gears as the Schuttler “Donkey”. Clearly, this was intended to help grow sales and distribution as a sister product to Springfield’s “Missouri Mule” wagon gear. But, with such a strong western history and immensely powerful reputation, being labeled as a ‘donkey’ seems a bit over the top today. No doubt, at the time, the resilience and strength of the four legged animal was likely meant to be a compliment and selling feature. Go figure. 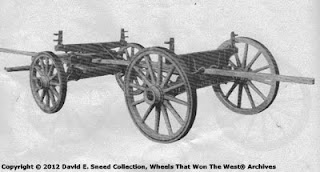 Posted by David Sneed, Wheels That Won The West® Archives, LLC at 6:45 AM

Earlier this year, our January 11th post shared some details related to freight wagons used in the construction of the Roosevelt Dam at the turn of the twentieth century.  As a follow-up to that listing, archeologist Jon Czaplicki with the Arizona Bureau of (Water) Reclamation, Salt River Project recently wrote to let us know of a segment of their website they just completed. 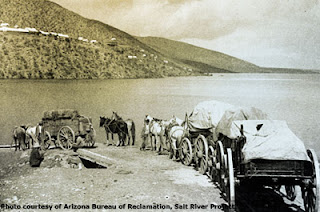 Celebrating the Centennial Anniversary of the completion of the Roosevelt Dam, the “Wagon Masters” section of the site includes some wonderful, early shots of heavy, wood-wheeled vehicles at work in and around the dam site.  Take a look at the collection of early freight wagon and coaching images at the link below.  Thanks again to Jon Czaplicki and the Arizona Bureau of Reclamation, Salt River Project for helping preserve this important part of America’s horse-drawn history.  Click Here to check out their site…
Posted by David Sneed, Wheels That Won The West® Archives, LLC at 3:00 PM