I spoke to a gentleman a few weeks ago who asked whether a Weber wagon box would normally be found on a McCormick-Deering running gear.  It’s a great question and one that cuts to the heart of how things were done back in the day.  Oftentimes today, collectors look for the perfect original vehicle… One with strong paint and logos, no unsoundness in the wood and a world of accessories that somehow managed to stay with the wagon over the last century.  Truth is, there is almost always a compromise to those wishes. 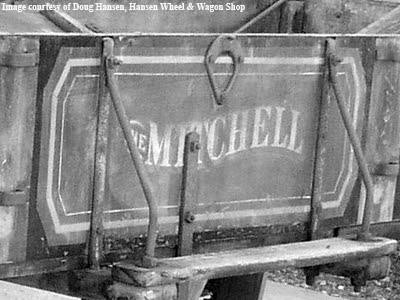 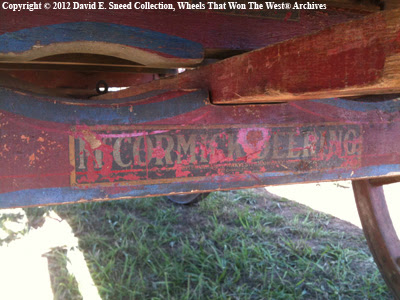 But, back to the question... "Would it have been possible for a Weber box to have been placed on a McCormick-Deering gear at the dealership?"  Personally, I am confident this did happen.  I also know from period correspondence in our Wheels That Won The West® Archives that the boxes and gears were sometimes mixed by the end users.  One example that comes to mind is an old Reward Notice we have that was sent to various law enforcement officers in Texas.  The message on the notice indicates that a 2-year-old "Peter Schuttler Wagon with Luedinghaus bed" had been stolen.  The owner offered money for return of the wagon as well as capture of the thieves.  Interestingly, the reward was greater for the thief than the wagon itself!  Moral of the story... Don't mess with Texas and don't mess with a man's wagon - mismatched or not!
Posted by David Sneed, Wheels That Won The West® Archives, LLC at 5:52 AM

Whether selling, buying or attending as a spectator, early wagon and vehicle auctions are always interesting for a number of reasons.  Not the least of which is that they give us an opportunity to examine and potentially learn more about these vintage wheels.  There can be dozens of brands, vehicle types, construction methods and manufacturing eras represented.  As a result, each vehicle can carry a wealth of potentially valuable information just waiting to be discovered. 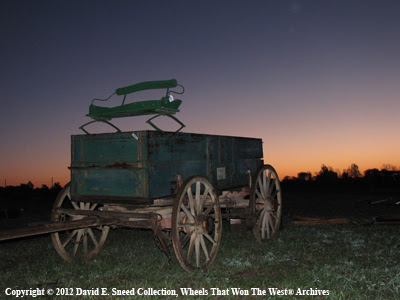 To that point, I often receive queries asking how a particular maker labeled their vehicles.  It’s a difficult question to answer because – like today – those standards tended to change over time as well as between different models and regions of use.  Not long ago, I had someone ask if a particular logo from a Weber wagon was indicative of an older design.  In this case, it was not.  I’ll give the person credit, though, for recognizing a difference and understanding that there was relevance to these areas.  Oftentimes, that’s where the best lessons take place – when we see a distinctive difference and then work to secure an answer reinforced by primary sources.

The next time you’re at a vehicle auction, take some extra moments to look closer at the differences between similar vehicles.  It’s a practice that will ultimately – and inevitably – uncover important details that not only help to better understand and appreciate these work horses on wheels but, can also play a key role in preventing buyer’s remorse down the road.
Posted by David Sneed, Wheels That Won The West® Archives, LLC at 4:24 AM

Locating authoritative and well-studied resources covering early wood-wheeled vehicles like stagecoaches and wagons as well as a broad contingent of business, ranch and military transports can be challenging. 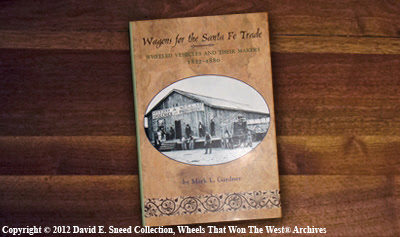 After almost two decades of daily research, I still encounter folks looking for that one comprehensive book that covers everything.  I’ll admit, it would be nice to have such a piece and while I try to never say ‘never’… truth is, it will never happen.  Why?  Because with tens of thousands of known makers and even more variations in design and manufacturing methods, the horse-drawn vehicle industry was just too massive to authoritatively and concisely cover in one simple volume today.
My personal pursuit of reliable and documentable information began before the internet had established itself as a household necessity.  Early on, I was fortunate to find a used book store that sold western books in their “Americana” section.  For years, I frequented this place, occasionally stumbling across a ‘find’ and purchasing it.  I learned to comb through the footnotes, endnotes and bibliographies of each of these discoveries in an effort to uncover even more valuable answers and details. 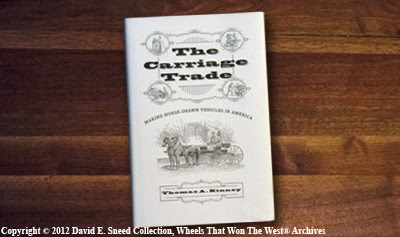 Within a few years, the world wide web had grown to sufficient bandwidth and postings that it began to be more useful in locating primary source materials.  (A word of caution and a reminder here that while the internet is full of information, not every posting on-line can be supported by facts.)
To start, grow and more fully develop your own western vehicle library, it’s important to keep a number of points in mind like…
-          Dividing your focus into specific categories of interest can prove beneficial as it helps highlight the depth of the subjects.  Vehicle types, makers, geographic regions, historic ventures and/or specific time periods are just some of the potential categories to consider.
-          Scour bibliographies of books and articles for previously unknown works that may reinforce your interests.
-          Subscribe to publications produced by organizations with similar interests…i.e… The Carriage Journal magazine, Farm Collector magazine, Wagon Tracks newsletter (Santa Fe Trail Association), National Stagecoach & Freight Wagon Association,  American Chuck Wagon Association and others.
-          Ask noted writers, historians and/or groups to recommend specific books.  I provided an abbreviated list to the National Stagecoach & Freight Wagon Association a few years ago and I believe it’s still on their website.
-          While there are some great contemporary works available today, remember that many early resources for antique wagons and coaches will be out-of-print.  You may be successful finding more modern works in places like Amazon.com or Barnes & Noble but, others may require a bit of sleuthing within outlets like Ebay or smaller firms selling collector books and ephemera. 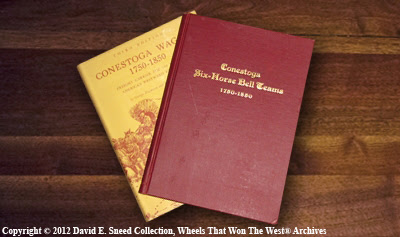 The Wheels That Won The West® Archives started with one book purchased in the mid-1990’s.  Today, this extensive resource is made up of hundreds of rare books and even more original catalogs and early sales materials.  Combined with thousands of primary source images, the collection has become an essential aspect of our research and ability to share historically accurate details with western vehicle enthusiasts the world over.
Posted by David Sneed, Wheels That Won The West® Archives, LLC at 5:37 AM

The first one-horse wagon I owned was a John Deere.  With single sideboards, petite hubs, a condensed box size and high, narrow wheels, it wasn’t just a well-balanced and light weight piece of functional art but an equally strong vehicle - ready to take on a host of jobs from the farm, ranch or business it would have supported during the first part of the twentieth century.
Built on a smaller scale, one horse wagons like this and even their smaller ‘pony wagon’ cousins share a similar look and design structure with full-size farm wagons.  That said, they’re typically a less common sight and, as such, it’s harder to locate and review survivors from the thousands of brands built during the 18 and 1900’s.  Recently, we received several images of a Mitchell brand one-horse wagon. 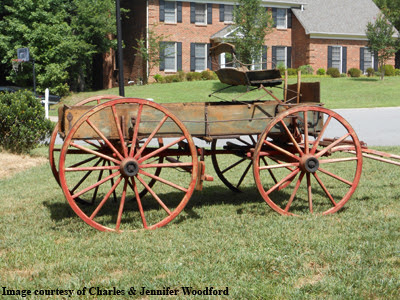 With roots dating to the early 1830’s, Mitchell carries a strong western heritage.  The founder, Henry Mitchell, was born in Scotland and immigrated to America in 1834.  Almost immediately after his arrival in the U.S., Mr. Mitchell began building vehicles.  From emigrants traveling the plains and early farming on the frontier to the storied work of chuck wagons and heavy western freighters, the Mitchell name carries a legendary legacy. 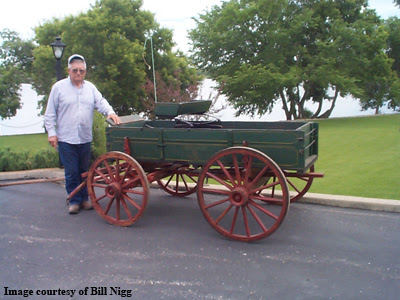 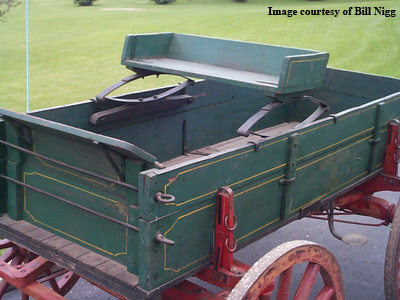 Posted by David Sneed, Wheels That Won The West® Archives, LLC at 4:47 AM